Mailer is Proteus. Perhaps no career in American literature has been at once so brilliant, varied, controversial, improvisational, public, productive, lengthy and misunderstood.

Few American writers have had their careers on the minds of contemporary critics and on the anvil of public inspection for such a lengthy time span; none has been so reviled and celebrated in the same and so many seasons. The Mailer record, while sometimes obvious and redundant, has never been fully compiled and therefore never completely relished. Valuable pioneering efforts to compile this record have been made over the years, notably by Robert F. Lucid, Laura Adams and Thomas Fiske. But whenever Mailer sought new opportunities, metamorphosing from novelist into biographer, film director, politician, public intellectual or sports reporter (and always back to novelist), the need for more bibliographic scaffolding became apparent. Because his direction changed so often, because his output has been so prodigious, and because his words have appeared in so many different and often obscure publications, all previous Mailer compilations, including my own, are fragmentary. Norman Mailer: Works and Days is built upon these earlier efforts and is much indebted to them.

In the wake of Mailer’s death in November 2007, at the age of 84, came an avalanche of eulogies, memoirs and critical estimates, Phillip Sipiora’s collection of 49 Mailer’s essays, my edition of his letters (714 out of approximately 45,000), numerous reissues of his books by various publishes, especially Random House, his publisher from 1984 until his death, and my authorized biography, Norman Mailer: A Double Life. Just weeks before Mailer’s death, the first issue of The Mailer Review appeared. Mailer admired it as he lay dying in a New York hospital. Jointly sponsored by the Norman Mailer Society and the University of South Florida, this double-issue annual has appeared each fall since 2007. The Review, which contains a broad range of expertly edited essays, reviews, memoirs, documentary material, and a number of heretofore unpublished short works by Mailer, is a major contributor to Mailer’s legacy. This outpouring of all this material, which continues unabated, and the discovery of many new items from earlier years necessitated this expanded and corrected edition of Works and Days. 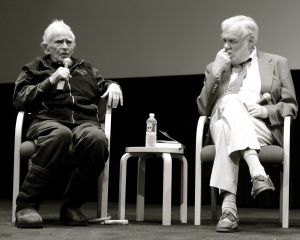 Norman Mailer and Mike Lennon in 2007.

In a career that stretched over seven decades, Mailer not only published 44 books (including 12 novels), he wrote several plays (and staged them); screenplays (and directed and acted in them); columns and reports for scores of periodicals of every stripe; poems (for both Nugget and The New Yorker, among others); and essayed every sort of narrative form (including some he invented). He reported on six sets of political conventions (1960, 1964, 1968, 1972, 1992, 1996); participated in scores of symposia, appeared and debated hundreds of times on college campuses from the 1950s to the 2000s; delighted and challenged, amused and appalled audiences in numerous venues; and enjoyed a vigorous public and private life in New York, Provincetown, Massachusetts and Mt. Desert, Maine. His passions, feuds, imbroglios, generosities, litigations, embarrassments and loyalties are numerous, notorious and complex. Happily married for over a quarter of a century to Norris Church, he was wed five times previously and has nine children all told. A stalwart on radio and television talk shows for a half-century, he may have been interviewed more frequently than any other writer. Without being paid for his pains, he has given advice to several presidents, has run for office himself (mayor of New York), served as president of the American chapter of P.E.N., and has won most of the major literary awards except the Nobel. Cofounder of The Village Voice, he also named it, and was a major player in the effort to break down barriers between popular, underground and elite periodicals. He has written for every kind of periodical: Dissent, Ladies Home Journal and One: The Homosexual Magazine, Parade, Playboy, Esquire and Vanity Fair, from Way Out and Fuck You: A Magazine of the Arts all the way over to Paris Review, Commentary, Harper’s, New Yorker, and The New York Review of Books. Not counting interviews, routine letters to the editor, questionnaires and symposia, Mailer has written for at least 100 different periodicals.

The ambition of Norman Mailer: Works and Days is to chronicle Mailer’s professional career, to nominate, delineate, annotate and cross-reference every significant Mailer utterance in print in English (an impossible task worth attempting), as well as the chief events of his life. Also included are a select secondary bibliography, and several appendices. The photographs and illustrations, one for most years from 1941 through 2014, are intended to add evocative interrelations to the record. The Chicago Manual of Style (14th ed.) has been our regular if not exclusive guide for “Works,” “Days,” and the bibliography.[1]

Works and Days is first of all a primary bibliography, one that attempts to be comprehensive. It fails. New Mailer poems, interviews, letters to the editor, and articles with original quotations from him turn up regularly. But the great bulk of significant published items by Mailer, or in which he is quoted, have been located and described. Every named item has been sighted and checked. It is certain, however, that there will be future discoveries.

The following have not been included: non-English language items, unpublished writings, audio and video material (but original Internet items have been included), blurbs for the books of other writers, letters to the editor signed jointly with other individuals, brief and/or inconsequential Mailer quotations in gossip and chatter magazines. Also excluded are published drawings and sheet music—Mailer collaborated on the lyrics to “You’ll Come Back (You Always Do)” for the film version of one of his novels (see 87.2). Besides the usual categories of novel, poem, play, essay, short story and interview (consisting entirely or almost so of questions and answers), we have created the categories of article-interview (reports based on interviews with Mailer, and quoting him), and of article (reports of news conferences or speeches in which Mailer is quoted, but not formally interviewed). There are other categories, but their nature is self-evident—nonfiction narrative, for example.

Each item is numbered chronologically within a year. For example, 87.2 cited above refers to the second item (of 39) in 1987, a 12 January 1987 article-interview by Dinitia Smith that quoted Mailer and appeared in New York magazine. To the 1110 items in the first edition, approximately 400 new ones have been added to this revised edition of Works and Days. A new item that appears chronologically between two items in the first edition is identified by a letter after the number of the preceding item. For example, 87.2a, a 1 February 1987 article-interview in the Manchester Guardian by Henri Behar, follows the Dinita Smith article-interview, 87.2, noted above. In a number of cases, letters beyond “a” are needed for new items. There are 132 such new items from the years 1941-1998.

Successive variants of an item are named, numbered and the changes described. The Naked and the Dead, for example, is listed twice after its initial 48.2 appearance: as 79.36 and as 98.6; Mailer added a preface to the 1979 Franklin Library edition of his first published novel, and added another (dropping the first) to the 1998 Henry Holt edition. When an item was collected by an editor before Mailer collected it himself (a common occurrence), the earlier collection is noted, e.g., his essay “The White Negro” (57.1) was collected in The Beat Generation and the Angry Young Men before Mailer did so in Advertisements for Myself (59.13).

No attempt has been made to list the vast number of reprints of Mailer’s essays and other pieces (that is, reprintings containing no authorial change) in periodicals or anthologies, except in cases where the reprinting is particularly significant. Beyond first editions in the U.S. and U.K., no attempt has been made to list subsequent editions, impressions and states of Mailer’s books, except when a hardcover edition has been preceded by a softcover edition, as is the case with St. George and the Godfather (72.17 and 83.49); or, to repeat, when Mailer has revised or added something, such as the new concluding chapter that he added to the softcover edition of Marilyn (75.3), published two years after the hardcover edition (73.30). When reprint information appears (after Rpt:), it is both prospective and retrospective, that is, it refers to earlier and later appearances of an item. This information, however, is confined to Mailer’s work, apart from the intervening collections and significant reprintings noted above.

Annotation has been added to the great majority of items. Most of this comment is descriptive, but the line is occasionally crossed into the realm of evaluation and comparative judgment. Standard publication information for books is augmented by the addition of Mailer’s dedications and “appreciations”, and (in most cases) by precise dates of publication in the U.S. and U.K., number of pages and price. Other pertinent information has been added as available. A comment from Mailer on the nature, method, merit and/or compositional history of his major book publications follows the entry for these items. These comments are taken from the item itself, from its preface or from a subsequent interview. Our bias has been towards inclusivity, but we have eschewed description of Mailer books as objects (bindings, dust jackets, colophons, etc.) except when such detail reveals something significant about the text. Works and Days is intended for both a scholarly-critical audience and for book collectors and other admirers of Mailer’s work. It should be helpful to both (overlapping) groups, especially on matters of precedence and context.

The continuity of Mailer’s career as a writer has been insufficiently appreciated. The opening lines of scores of articles (often titled “Stormin’ Norman”) and article-interviews present a picture of Mailer as volcano, erupting with spasmodic violence and then subsiding into periods of recovery and apparent dormancy. Works and Days identifies approximately 1500 links within the sequence of his professional life and suggests, via annotation and cross-referencing, how they cohere into a mesh of craft and intentionality. The cross-referencing is both topical, and also tries to indicate the changes he made as items were revised or augmented. So, for example, Mailer’s theological views, as revealed most notably in several items (59.2, 75.2, 75.11, 82.15, 83.45, 89.11), are linked by cross-reference. The entries for his major publications serve as cross-reference hubs: go there first to connect with earlier or later versions of an item. Among the numbered items (”Works”), the life chronology (”Days”), illustrations and appendices, a good deal of what is of interest in Mailer’s life and literary career can be contextualized. Our hope is that anyone interested in his work will find in Works and Days a solid place to begin.