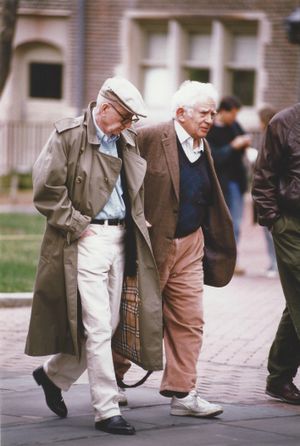 The late Robert F. Lucid (1930–2006), longtime Professor of English at the University of Pennsylvania, was a leading Mailer scholar and critic, often called “the dean” of Mailer scholarship. A close friend of Mailer’s since 1958, he was working on the authorized biography when he died. In the late 1960s, with Mailer’s mother, Fan, he created the Mailer Archive, now residing in the Harry Ransom Humanities Research Center at the University of Texas, Austin. Lucid wrote numerous essays and reviews on Mailer and his work and edited two pioneering collections: Norman Mailer: The Man and His Work (1971), essays and reviews, and The Long Patrol: 25 Years of Writing from the Work of Norman Mailer (1971), selections from 13 of Mailer’s books. Friend and mentor to many in The Mailer Society, he was one of its founders and served on the Society’s Board of Directors. The Robert F. Lucid Award for Mailer Studies was created in his honor by the Society in 2003.