Without access to the Mailer archive and to Mailer himself, this volume would have been impossible. From 1982, when it began taking shape during the editing of Pieces and Pontifications (82.16), Mailer was consulted many times. His eye on the manuscript was crucial, his generosity unstinting. His wife, the late Norris Church, helped the project in many ways and supplied items obtainable elsewhere. The friendship and remarkable support of the Mailer family, all nine children (Susan, Danielle, Elizabeth Anne (Betsy), Kate, Michael, Stephen, Matthew, Maggie, John Buffalo, and their cousin, Peter Alson) have been essential from start to finish. Mailer's sister, Barbara Wasserman, and his assistant, the late Judith McNally, provided unique insights and encouragement. Wasserman, the chief guide to Mailer family history, collected and preserved the photographs in the archive — many of them gratefully reproduced here as illustrations. McNally, Mailer's assistant since 1978, had her finger on many of the items described and filled in countless publication details. It was the late Robert F. Lucid, Mailer's friend of 40 years, who — with the help and blessing of Mailer's mother — first created the Mailer archive in the early 70s. Lucid's checklist of Mailer's work in his 1971 collection, Norman Mailer: The Man and His Work, is the place where all Mailer bibliographers must begin. He was our principal advisor, and his enthusiasm and counsel was crucial to the project throughout. Indeed, the unflagging and cheerful help of this "Mailer team" was marvelous and kept us always on task. 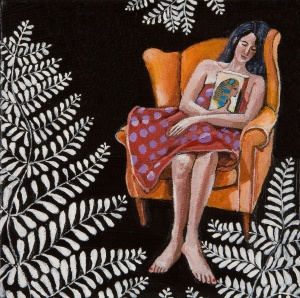 "The Good Daughter", by Danielle Mailer, acrylic on canvas, 8x8, 2007. Used with permission of the artist.

Laura Adams's Norman Mailer: A Comprehensive Bibliography, which appeared in 1974, was the first major Mailer bibliography, and as noted earlier, was indispensable to the creation of this volume, as it was to earlier efforts noted in the secondary bibliography. But many new items have been discovered over the past 44 years, and the revised Works and Days contains more than twice as many primary items for the period 1941 to 1974 as does Adams's compilation. Equaling Adams's volume in value is Thomas Fiske's unpublished work, "A Collector's Bibliography of Norman Mailer". Fiske's regular and thoughtful assistance on many perplexing matters has been invaluable. The Mailer Author Price Guide, no. 114.2 (1997) by Allen and the late Patricia Ahearn of Quill and Brush Books, which provides reliable information on first editions in English, has been an excellent resource. Finally, B.A. Sokoloff's 1969 compilation, A Bibliography of Norman Mailer, has been useful, especially for early reviews of Mailer's books.

Two other people, Peter Lennon and the late Gloria Taylor, have played major roles in the creation of Works and Days. Peter, Michael’s brother, and the “mayor” of Casterbridge Books in Chicago, has sent us more items than anyone else and advised us continuously on matter of form and substance. The late Gloria Taylor of the Illinois State Library in Springfield, performed a huge amount of research for the project throughout the 80s. Peter’s and Gloria’s bibliographic fingerprints are all over this book.

Besides Norman and Norris, Lucid, Fiske, Wasserman and Peter Lennon, the following individuals have read and commented on the manuscript: Robert Begiebing, Judith Everson (several times), the late Barry Leeds, Jon Lindgren, Michael Millgate, the late Willie Morris, Nancy Potter and Larry Shiner. We have been saved from errors egregious and embarrassing by these careful editors and good friends. Out sons, James, Joseph and Stephen, have also contributed greatly and listened heroically.

Michael is extremely grateful for the awarding of a spring 1998 sabbatical, upon the recommendation of President Christopher N. Breiseth, from Wilkes University. Breiseth’s friendship and understanding have been extraordinary and enabled us to make the final push to completion. Dr. Harold E. Cox, Director of the Wilkes University Press, has advised us on documentary editing and publication issues for seven years. His counsel and friendship have been similarly extraordinary.

Three libraries have been especially helpful: Illinois State Library, Springfield; Norris L. Brookens Library at University of Illinois, Springfield; and the Eugene S. Farley Library at Wilkes University, Wilkes-Barre, Pennsylvania. Gloria Taylor was our chief contact at the Illinois State Library; at the University of Illinois, Springfield (formerly Sangamon State University), we were greatly assisted by Brian Alley, the late Dick Kipp and Ned Wass; Jon Lindgren, Head Librarian at the Farley Library, was an indefatigable and resourceful friend, as has research librarian Brian Sacolic. We are most grateful for this professional advice and assistance.

Our deepest thanks go out to all those named and unnamed, remembered or, alas, forgotten, who have helped us build Norman Mailer: Works and Days over the past 35 years.