My father once dedicated a book he and I wrote together to my mother, with the words:

At the time I felt that it was a bit simple, that perhaps we could come up with something more elegant. But, of course, my father held his ground and we went with it. Now that both of my parents have crossed over, I am beginning to understand more and more why he was absolutely right to stick with that dedication. 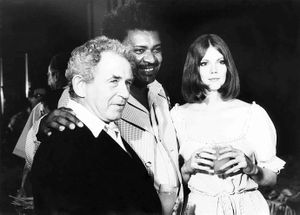 I keep a picture on my desk of mom and dad at a fancy party, Don King standing between them, his arms around each. She holds her glass with a delicate grace, as she handled just about everything life had to throw her way. The grin at the edges of her lips indicates a mixture of awe and understanding, like she knows that where she is, who she is standing next to, and what she is looking at are special, a rare treat few get to experience. But her eyes reveal an inner confidence, the knowledge that although she is at one of the parties that people of such taste always dream of going to, she is just as special as anyone there. Her humility was such that she would never allow herself to think she was more special than anyone else, but just as special, that she knew in every way.

Perhaps this is what people loved most about my mother; she had every right to act the role of a queen (for truly, when one was face to face with Barbara Jean Davis Norris Church Mailer, her beauty had a stupefying effect not unlike the sensation one gets when unexpectedly faced with royalty), but she was never anything less than the genuine, kind girl from the heart of this country who grew up with a mud floor and an outhouse until she was seven years old. She made anyone who talked to her feel as though not only theirs, but everyone’s dreams were possible. When you met her at a party, for the short time you got to spend in her presence, she made you feel as beautiful as she was, as if anyone could be under the right light.

She didn’t hold her beauty above anyone’s head, or use it to excuse rude behavior. She was never rude. At least, she was never rude to anyone who didn’t bring it on themselves with less than a tasteful remark within her earshot. Mom was fond of defending other people and it didn’t matter who you were or where you were, if you stepped out of line, she would let you know in no small terms. As a result, one always wanted to be a better person when they were around my mom.

With every word that I read in helping The Mailer Review put this tribute together, it became clearer and clearer to me that this is the effect she had on the vast majority of people who were lucky enough to know her. After having worked as an editor for three national magazines, I have to say that this was the hardest editing job I have ever undertaken. I would be lying if I told you that tears did not come to my eyes with each piece submitted. But I also cannot describe the joy I felt as I experienced the revelation of getting to know my mother through the lens of each of these talented and generous writers collected herein.

My hope is that in reading this tribute, those who miss my mother will once again have the opportunity to spend time in her world through the experiences depicted, and those who never had the good fortune to encounter my mother in the flesh (for we all know she was taken from us far too soon) can get a taste of what she brought to the table, and perhaps carry on the essence of the way she looked at the world; as beautiful, even the rough parts.

This is dedicated to A Lovely Lady — Barbara Jean Davis Norris Church Mailer.