The Mailer Review/Volume 2, 2008/The Time of His Time: A Celebration of the Life of Norman Mailer 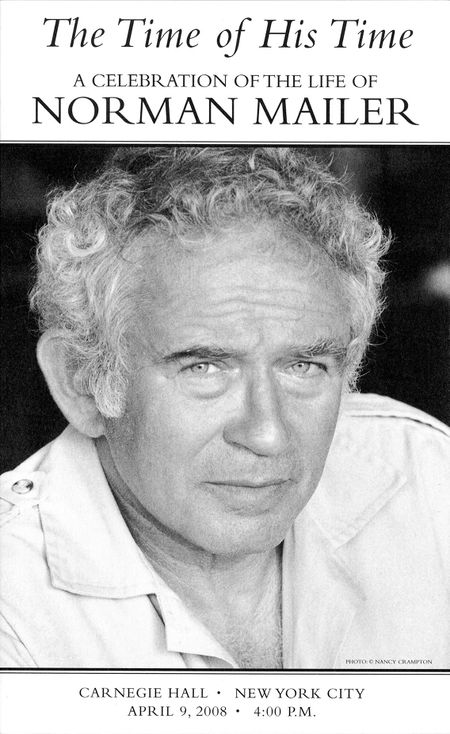 On April 9, 2008, approximately 2,400 family, friends and admirers gathered at Carnegie Hall for a three-hour tribute to Norman Mailer. The event was sponsored by Mailer’s publisher of twenty-five years, Random House, and was hosted by Charlie Rose. Random House Publisher Gina Centrello welcomed the guests. The program was produced by Norris Church Mailer, Lawrence Schiller, Carol Schneider, and J. Michael Lennon, with able assistance from Donna Pedro Lennon and Maria Braeckel. The event included spoken tributes from twenty-five individuals, including twelve members of the Mailer family, and musical tributes from his wife, Norris Church Mailer; Mailer’s son-in-law, Peter McEachern (trombone); and his daughter-in-law, Sasha Lazard (voice). In addition, there were photographic montages and video tributes. At the end of the program, the establishment of The Norman Mailer Writers Colony was announced by Sam Radin and Lawrence Schiller. The Mailer Review is grateful to the Mailer Family, Random House, and all the other participants for permission to reprint their tributes.

“Autumn in New York” Music and lyrics by Vernon Duke; played by Sonny Stitt. “Requiem for a Boxer” By Peter McEachern.

“You’ll Come Back (You Always Do)” Music by Angelo Badalamenti; lyrics by Norman Mailer.