The annual conference of the Norman Mailer Society was held in Provincetown, MA, September 30 through October 3, 2015.

Thanks to all for making this conference a memorable one, with the highest attendance in several years (about 85), including several new young academics from around the country. 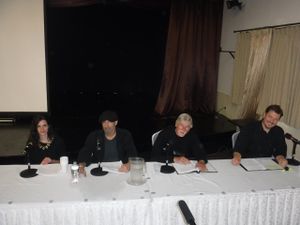 We had 32 panels/films/plays/papers, and a terrific, memorable keynote address by Kate Mailer. Also: A reading by biographer Kevin Schultz from his new book, Buckley and Mailer; Ron Fried’s, “Two Mailers,” a moving-70 minute play (starring Ken Vose, Ross Klavan, and in her inaugural performance, Maggie McKinley); a brilliant marathon reading Tough Guys Don’t Dance directed by Ken Vose and Bonnie Culver, with several Society members playing roles; Chris Busa’s walking/driving tour of P-Town; and the screening, re-discovered (by Michael Chaiken), of a 1966 documentary of Mailer in Provincetown. Plus, a bunch of great individual papers and panels. Seven members of the Mailer clan attended, a record, and all of them were on the program. Kate’s imitation of her father was deftly and humorously done with great élan. We taped it, and you will see it via Project Mailer.

A memorial was held for Barry Leeds. It was a moving, warm, wonderful trip down memory lane remembering our pal. Ashley and Linda spoke, as did several members of the Board. Salud Barry!

Ashley Leeds presented the Society with a $5,000 check to launch the Barry Leeds Travel Fund, and several of you have also made generous contributions, which bring the total to approximately $7,000. We would like to get the total to $10,000, and if you have not contributed, please consider doing so. The money will go for $100 grants to students attending future conferences (this is an excellent way to bring in new members) and, as the Board decided at the post-mortem meeting, one annual grant of $250 to a scholar traveling to the HRC at Univ. of Texas to work in the Mailer Papers Archive.

Elizabeth Mailer, and her husband Frank Nastasi, also made a large contribution to the Society, $2500 for transcribing some of the panels, and other expenses. This follows their contribution last year of $10,000 in support of the Project Mailer. We thank them for their generous and timely support.

Justin Bozung was elected to fill Barry’s slot on the board, and Maggie will succeed him as V.P. Marc’s minutes will have all the details on the terms of Board members.

Don Kaufmann, who like Barry wrote a pioneering study of Mailer’s work, passed away on October 13. Don was a life member of the Society, and attended several meetings and making memorable presentations. In 1969, Don He wrote the pioneering study, Norman Mailer: The Countdown/The First Twenty Years, and last year he published another study of Mailer, Norman Mailer: Legacy and Literary Americana. His essays on Mailer appeared in The Mailer Review. He was a good friend of Mailer’s, dating back to the 1960s, and was his host when Mailer made his Alaskan trip in 1965. Don was Emeritus Professor of English at the University of South Florida.

The 2016 conference will be held at at Monmouth University in Long Branch, NJ, Mailer’s hometown on September 28-October 2. Barbara Wasserman, who was also born there, will be the luncheon speaker. Mark your calendars, and please think of panel/paper/event ideas.

This month has also seen Medium’s update that allows custom URLs for publications. Notice, our “Norman Mailer” publications now now resolves at normanmailer.us. Please consider participating by submitting your Mailer memories and artifacts. Learn how you can contribute with my post “Project Mailer 2015,” a preview of an upcoming article in “The Mailer Review”.

Thanks to Justin Bozung, we are now beginning to publish full-text posts of classic articles and interviews with and about NM. Many of these correspond to entries in Norman Mailer: Works and Days which continues to receive updates.

If you haven’t already, please consider joining us on social media to keep up-to-date. The health of Mailer’s legacy relies on our participation.