The Structured Vision of Norman Mailer 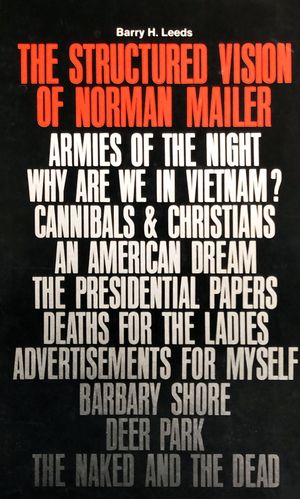 Cover of The Structured Vision of Norman Mailer.
Written by
Barry H. LeedsNote: The digital edition for Project Mailer is designed and edited by Gerald R. Lucas.URL: https://prmlr.us/svnm

In no other writer since Hemingway has a personal image so influenced and clouded critical opinion. This, the first full-length study of Norman Mailer's works, attempts to deal honestly with Mailer the artist.

In his examination of Mailer's fiction, Dr. Leeds contends that the artist's thematic concern with the plight of the individual in con­temporary society is a legacy of the thirties, modified by Mailer's unique perspective. Leeds con­tinues with an appraisal of the non­ fiction, tracing the development of the writer's distinctive narrative voice from the early works to the extraordinarily successful The Armies of the Night.

Leeds concludes that this book, which won the 1968 National Book Award for Arts and Letters, is a fusion of elements of both the fiction and the nonfiction. As he puts it: “Three lines of development converge here: Mailer’s fiction, his previous nonfiction works, his public image. . . . [The Armies of the Night is the] logical culmination of Mailer’s personal concern with the individual and American society, and his increasing control over narrative prose, as they have developed over two decades.”