In the fall of 2002, my wife Donna and I were living in Provincetown, and Gore Vidal was coming to town. I was editing a collection of Mailer’s letters and Vidal was a major presence in them. We had also heard a lot of talk at the Mailer dinner table about both the iniquities of Gore, and his acts of generosity. Norris Mailer seemed to have a soft spot for Vidal. The relationship of Norman and Gore went back to 1952. Within minutes of their first meeting, Vidal asked Mailer at what ages his grandparents had died. Mailer told him, and Vidal then proclaimed that he would outlive him, based on the longevity of his own. Neither of them ever forgot this conversation.

When Mailer was released from Bellevue in 1961 after wounding his second wife, Adele, with a penknife, Vidal was one of the first of their circle to invite the Mailers for a visit, an act that touched Mailer. They saw a good deal of each other in the 1960s and remained friends, although they occasionally sniped at each other in interviews and on talk shows — both were regular guests on the talk show circuit. In a 1971 New York Review of Books essay, Vidal equated Mailer and Henry Miller with Charles Manson as consummate sexists — “the 3M Man.” Mailer was furious, and butted Vidal’s head in the green room before their appearance on the Dick Cavett Show, but Vidal was the tactical winner when they traded insults an hour later on the program. In 1977, Mailer bounced a booze-filled glass off Vidal’s noggin at a New York cocktail party as Jackie Kennedy watched. Vidal said later, “Again, words fail Norman Mailer.” 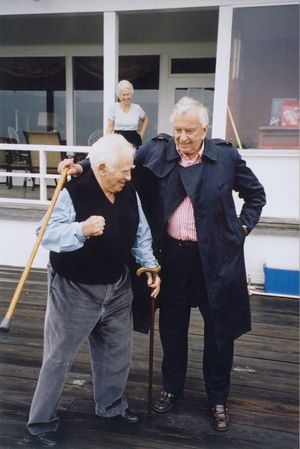 They had no contact until 1985 when Mailer needed Vidal’s help raising money to underwrite a meeting in New York of P.E.N, the international writers’ organization. Vidal graciously accepted, and shared the stage with Mailer. A few years later when Vidal reprinted the offending essay, he removed the reference to the “3M Man.” They were on good, but still slightly edgy terms, from that point on. Mailer needed him again in 2002 for a benefit in support of the Provincetown Repertory Theater. Gore knew the town, having escorted Jackie Kennedy (with whom he shared a stepfather) there in 1963 so that she could observe the town that Mailer called “the wild west of the east.” He accepted the invitation immediately. Norris thought Gore might be trying to make it up to Mailer for the “3M” essay.

The benefit was a staged reading of Shaw’s “Don Juan in Hell,” which Mailer and Vidal, along with Gay Talese and Susan Sontag, had done at Carnegie Hall in 1993.[1] Gore would again play the Devil (“typecasting” was the joke around town), and Mailer, for the first time, would play Don Juan, and also direct. Norris was Dona Ana, Don Juan’s former paramour, and I was her father, the Commodore. Vidal flew in from Rapallo, Italy, where he had lived for 30 years with his partner Howard Austen. He stayed down the street at a guest house, but came to the Mailer house every morning for Norris’ bacon and eggs.

Norris recalled the “wild and wooly week” in her memoir, A Ticket to the Circus: “Rehearsal all day, some kind of lunch and dinner, ending with a late night of drinking and sparring between Norman and Gore in our bar. I didn’t for the life of me see how Gore was making it so well. He had more energy than all of us combined. We were all exhausted.” I recall dropping Gore off at the guest house late one night, watching him pour himself a Scotch nightcap, and then returning in the morning to find him lying fully dressed on his bed with the glass still in his hand. The 77–year-old Vidal popped up and went right back to work. 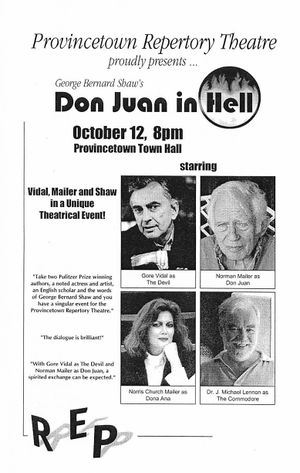 “Don Juan in Hell” is a 90-minute dream sequence in the third act of Shaw’s Man and Superman. It is often cut from productions of the play, one of Shaw’s finest dramas, and performed separately. Mailer trimmed “Don Juan” to 60 minutes, and made further refinements during rehearsals. Vidal knew his part almost by heart, and while he listened politely to Mailer’s suggestions, he played the role his own way. On the night of the performance, Vidal, wearing a jacket with a scarlet lining, told Mailer, “Norman, when I walk on that stage, you are going to hear a roar of applause the likes of which you have never heard.” The applause was indeed thunderous and the Devil stole the show. Vidal had a strong, resonant voice and he played the role with wicked wit and flair. He was especially memorable when he extolled the superiority of his abode over the dull place upstairs. The four dissect with every weapon of wit and rhetoric the great philosophical questions, culminating in a masterful set of exchanges between Don Juan and the Devil on the merits of the Life Force. It is brilliant dialogue, perhaps Shaw’s finest. “If you were scoring the bout, it would go to Vidal,” said one reviewer, who called Vidal’s portrayal “flawless.” Mailer agreed that Vidal was “terrific,” just as he had been at Carnegie Hall.

Vidal got another ovation from the 100-plus people at the Mailer home when he arrived after the show. He bowed, and said, “Where’s the booze?” He and Mailer posed for pictures, drank from Norman’s collection of single malt scotches, and talked into the shank of the night. As the party wound down, Norris recalled, Gore told her that he had better family genes than Norman, and was going to outlive him. “When that unhappy event occurs, I will marry you and take care of you,” he said, in apparently serious tones. Norris said thanks but no thanks. She didn’t want to remarry if Norman went before her.

My last memory of Gore is the following morning when he came to the house to say goodbye. He had just undergone a knee replacement a few weeks earlier, and was using a cane. Mailer had bad knees too, and had used one for several years. Standing on the deck overlooking the long curve of Provincetown Harbor, the two old troupers smiled and swung their canes about for Norris’ camera just before Gore departed. It was their last meeting.