From Project Mailer
< The Mailer Review‎ | Volume 2, 2008
Written by
J. Michael LennonAbstract: In six decades of work, Norman Mailer made the best seller list with eleven of his books, more than any other post-war American writer.URL: https://prmlr.us/mr02len

On June 20, 1948, a Pacific war novel by a twenty-five year-old combat veteran from Brooklyn reached the number one position on the New York Times best-seller list. It remained on the list for sixty-two consecutive weeks, nineteen of them in the number one spot. After The Naked and the Dead, Norman Mailer never again made the first position on the Times list. But ten more of his books — eight of them novels — over six decades made the list, including his last novel, The Castle in the Forest. It reached number five on February 11, 2007, shortly after Mailer’s eighty-fourth birthday on 31 January, and less than a year before his death on 10 November.

No other major American writer of the post-war generation can boast of publishing best-selling novels over such a span of years, fifty-nine in Mailer’s case. Saul Bellow and Gore Vidal come closest. Bellow’s first best-seller was The Adventures of Augie March in 1953; his last was Ravelstein, which made it for a week in May 2000, when Bellow was eighty-five. Vidal, born in 1925, had a chance to pass Mailer, but his last novel, The Golden Age, appeared in 2000. His third novel, The City and the Pillar, spent eight weeks on the Times list in 1947. His last best seller was Live from Golgotha: The Gospel According to Gore Vidal, which spent two weeks on the list in 2002. Joyce Carol Oates and Philip Roth could surpass Mailer’s record, but have a way to go, and Roth has announced that he has given up writing. Their first best sellers appeared in 1973 and 1962, respectively.

Over the fifty-nine year period, Mailer’s books, including two nonfiction narratives, Marilyn: A Biography (1973), and The Executioner’s Song (1979), have spent a total of 160 weeks on the list. Song followed Naked’s sixty-two weeks with twenty-five, reaching number three in January 1980. This standing is the highest rung reached by any of his ten books that made the list after Naked. Song is generally considered to be Mailer’s second most popular book, as well as one of his most critically acclaimed. It won the Pulitzer Prize in 1980. Mailer’s other Pulitzer Prize winner, The Armies of the Night (1968), never made the best seller list, despite receiving the best reviews of any of his books, better even than those of Naked. Armies also won the National Book Award in the arts and letters category. 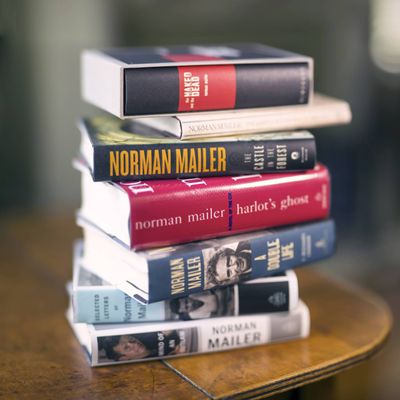 Following is a list of Mailer’s eleven best sellers, the number of weeks spent on the Times list, and the highest rung attained.

It is sometimes glibly claimed by “assorted bravos of the media and the literary world,” as they are referred to in Armies,[1] that Mailer indulged in too many extra-curricular pursuits—running for mayor of New York, making experimental films, writing columns for various periodicals, boxing, appearing on talk shows, protesting the Vietnam War, lecturing at colleges, etc.—and thus lessened his literary achievement. His forty-plus books and six decades of best sellers, most of them critically acclaimed, belie this canard.