Foreword to The Beard 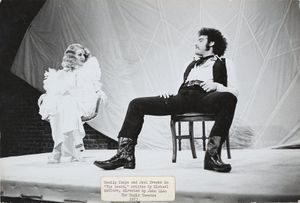 Michael McClure’s The Beard is a mysterious piece of work, for while its surface seems simple, repetitive and obscene, there is an action working which is dramatic and comic at once, and the play emits an odd but intense field of attention, almost as if ghosts from two periods of the American past were speaking across decades to each other, and yet at the same time are present in our living room undressing themselves or speaking to us of the nature of seduction, the nature of attraction, and particularly, the nature of perverse temper between a man and a woman. Obstinacy face to face with the sly feint and parry all in one, the repetition serves almost as subway stops on that electric trip a man and a woman make if they move from the mind to the flesh. That mysterious trip, whose mystery often resides to the dilemma of whether the action is extraordinarily serious or meaningless. It is with these ambiguities, these effervescences that The Beard plays, masterfully, be it said, like a juggler.