It is with great pleasure that we launch the Inaugural Issue of The Mailer Review. I emphasize “we” because the editorial staff experienced the pangs of delivery in bringing a multidimensional journal into existence. A significant number of midwives were required. Mike Lennon, President of the Norman Mailer Society and Chair of the Editorial Board, was instrumental in providing his steadfast support for what was only a dream but one short year ago. Indeed, at last October’s annual conference his driving enthusiasm was instrumental in articulating the importance of an author’s journal to the Mailer Society membership. Mike Lennon was and is strategically critical to brainstorming this and future issues, mapping out thematic topics and approaches, and generously sharing his many contacts with Mailer scholars and friends around the world. Hunt Hawkins, USF Chair of English, has been exceptionally supportive and enthusiastic from the moment of conception, as has been John Skvoretz, University of South Florida Dean of the College of Arts and Sciences. I am particularly grateful to Norman Mailer for giving his approval to the founding of the Review. Although Mr. Mailer has no financial or editorial connections to the Review, his intellectual and artistic presence over six decades is the force that made this endeavor possible. My special thanks to Susan Beegel, Editor of The Hemingway Review, for her sage counsel.

It is with great sadness that we observe the recent passing of Robert F. Lucid (1930 – 2006), a dear friend to so many Mailer enthusiasts, colleagues, and the students he so loved for so long. The Inaugural Issue of the Review is dedicated to Bob Lucid. When I last spoke to him in October of 2006 at the Mailer Symposium at the University of Texas Ransom Center, he said that he had high hopes for the success of the Review and he enthusiastically agreed to let us publish an

excerpt from his unfinished, authorized biography of Mailer, which appears in this issue. 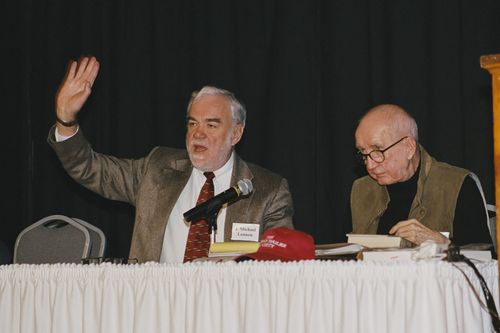 Mike Lennon and Robert Lucid at the Mailer Society Conference, 2004.

A professor of English at the University of Pennsylvania for decades, Bob Lucid, often referred to as the Dean of Mailer Studies, was a leading Mailer scholar and critic and was a close friend of Mailer’s for nearly fifty years. Lucid has written numerous essays and reviews on Mailer and his work and has edited two pioneering collections: Norman Mailer: The Man and His Work (1971), and The Long Patrol: 25 Years of Writing from the Work of Norman Mailer (1971), which includes selections from thirteen of Mailer’s books. Friend and mentor to many in The Mailer Society, he was one of its founders and served on the Society’s Board of Directors. The Robert F. Lucid Award for Mailer Studies was created in his honor by the Society in 2003. I will sorely miss his sparkling intelligence, wit, and insight into the complex world of letters and cultural phenomena.

These thoughts are titled “reflections” because I hope to use this column as a critical means of connecting with you, whether you are a casual reader interested in moments and movements in contemporary literature or a dedicated scholar exploring the complex dimensions of Norman Mailer’s life and works. The raison d’être for the Review is to provide a vehicle for the dissemination of new, insightful thinking employing a range of interpretative strategies. By no means will the Review be restricted to scholarly investigations, although scholarly research will always be valued by the Editors and the Editorial Board. There is room in the Review for interdisciplinary and intercultural approaches to any aspect of Mailer Studies, including creative work in the form of prose narrative, poetry, and drama. Norman Mailer’s work in cinema, as the director of four films and the inspiration for many more, is a natural stimulus for film interpretation and exploration to grace these pages. We encourage manuscripts of all types and each one will receive a careful evaluation by our editorial staff.

I am deeply honored and humbled to have been appointed founding editor of The Mailer Review. With this honor comes much responsibility, not only to you, today’s readers, but to the readers, enthusiasts, and scholars of tomorrow. Thoughtful consideration of and respect for Mr. Mailer and his family, as well as the Mailer community of scholars, friends, and admirers, is integral to the mission of The Mailer Review. Mindful of my obligation to publish the finest writing and images available, I will do my best to nourish and sustain The Mailer Review so that it will be the very best that it can be.