An American Dream Expanded/Definition of Selfhood

While I cannot determine just what a literary hoax is, judging from the whirlings and groans of the reviewers, An American Dream [SR, Mar. 20] must be a real apostasy. The entire literary community has adopted a posture of shocked betrayal. Mr. Hicks in particular writes like a spurned lover or, more to the point, a disappointed investor. ... 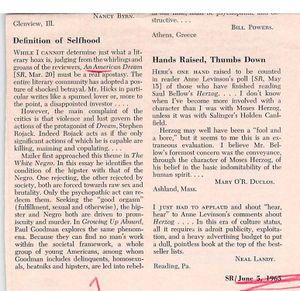 However, the main complaint of the critics is that violence and lust govern the actions of the protagonist of Dream, Stephen Rojack. Indeed Rojack acts as if the only significant actions of which he is capable are killing, maiming and copulating. . . .

Mailer first approached this theme in The White Negro. In this essay he identifies the condition of the hipster with that of the Negro. One rejecting, the other rejected by society, both are forced towards raw sex and brutality. Only the psychopathic act can redeem them. Seeking the “good orgasm” (fulfillment, sexual and otherwise), the hipster and Negro both are driven to promiscuity and murder. In Growing Up Absurd, Paul Goodman explores the same phenomena. Because they can find no man’s work within the societal framework, a whole group of young Americans, among whom Goodman includes delinquents, homosexuals, beatniks and hipsters, are led into rebellion by their need for real and fruitful challenge. Their antisocial behavior is a reaction to this de-virilization. Carrying the ideas contained in The White Negro into the creative plane, Mailer both describes and prescribes the psychotic state resulting from the hipsters’ alienation. Rojack is the hipster-psychopath seen from the inside out. Congressman, intellectual, teacher: none of these roles has satisfied him. Only in murder, the most terrible cutting off from society, is he completed. The whole novel is a sorting out, a solution developing from the act of killing. It is a dissolution, a letting go of the entire social man which places Rojack in position to rebegin his life. ... Bigger Thomas in Richard Wright’s Native Son illustrates this process in converse, completing the formula of The White Negro. Bigger kills and for the first time experiences the feeling of being an individual in the white world which has depraved him by oppression and direct denial of his manhood. Rojack comes to murder from the opposite direction (society, in conventional terms, has been good to him) to achieve the definition of selfhood.

Apparently it is the picture of the future of the American intellectual which repels Mr. Hicks, et. al. They cannot accept Mailer’s identification of the intellectual seeking valid fulfillment with the socially corrosive attitude of the hipster. They refuse to consider the possibility that significant action, in our time, must be psychopathic and destructive. ...