The life and art of Norman Mailer are discussed all over the pages of Life Magazine this week by an intelligent and gifted writer. Brock Brewer, who had the sense to acknowledge even before setting out on his 12-page journey that he doesn’t know (and neither does Mailer) what in fact is the goal of Mailer’s “reckless quest.” The heavy recognition of Mailer by the editors of Life is final confirmation that he is big on the literary scene—and more: that he is big on the American scene, for two reasons that most critics do not know how to explain but, by their friendly activity in trying, go so far as to acknowledge that the Quest to Explain Norman Mailer is itself worthwhile. 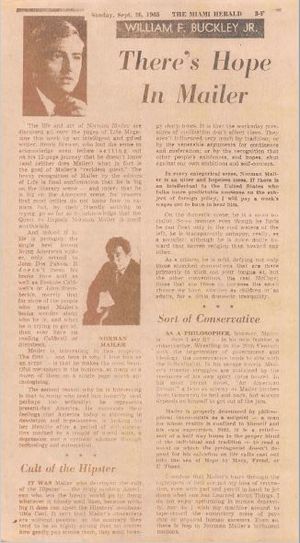 And indeed it is. He is probably the single best known living American writer, only second to John Dos Passos. It doesn’t mean his books have sold as well as Erskine Caldwell’s or John Steinbeck’s, merely that far more of the people who read Mailer’s books wonder about who he is, and what he trying to get at, than ever have on reading Caldwell or Steinbeck.

Mailer is interesting in two respects. The first—and here is why I love him as an artist—is that he makes the most beautiful metaphors in the business, as many as a dozen of them on a single page worth anthologizing.

The second reason why he is interesting is that too many who read him hungrily (and perhaps too seriously): he represents present-day America. He expresses their feelings that America today is shivering in desolation and hopelessness, is longing for her identity after a period of self-alienation marked by a couple of world wars, a depression and a cyclonic advance through technology and automation.

Cult of the Hipster

It was Mailer who developed the cult of the Hipster—the truly modern American who lets the bleary world go by doing whatever it bloody well likes, because nothing it does can upset the Hipsters’ inexhaustible Cool. It isn’t that Mailer’s characters are without passion: on the contrary they tend to be so highly strung that no matter how gently you stroke them, they emit twangy sharp tones. It is that the workaday pressures of civilization don’t affect them. They aren’t influenced very much by tradition; or by the venerable arguments for continence and moderation; or by the recognition that other people’s existences, and hopes, abut against our own ambitions and self-concern.

In every categorical sense, Norman Mailer is an utter and hopeless mess. If their is an intellectual in the United States who talks more predictable nonsense on the subject of foreign policy, I will pay a week’s wages not to have to hear him.

On the domestic scene, he is a so-so socialist. So-so because even though he finds he can float only in cool waters of the left, he is transparently unhappy, really, as a socialist: although he is more docile toward that barren religion than toward any other.

As a citizen, he is wild, defying not only those starched conventions that are there primarily to stick out your tongue at, but the other conventions, the real McCoys: those that are there to increase the small chance we have whether as children or as adults, for a little domestic tranquility.

As a philosopher, however, Mailer is—dare I say it?—in his own fashion, a conservative. Wrestling in the 20th Century with the hegemonies of government and ideology, the conservative tends to side with the individualist. In his savage novels, Mailer’s titanic struggles are sustained by the resources of his own spirit (plus booze). In his most recent novel, An American Dream, a hero as screwy as Mailer lurches from Gomorrah to hell and back, but always depends on himself to get out of the jam.

Mailer is properly denounced by philosophical taxonomists as a solipsist—a man for whom reality is confined to himself and his own experience. Still, it is a relief—sort of a half way house to the proper blend of the individual and tradition—to read a novel in which the protagonist doesn’t depend for his salvation on life rafts coast out into the sea of Hope by Marx, Freud, or U Thant.

I confess that Mailer’s tours through the nightspots of hell are not my idea of recreation, even with pad and pencil in hand to jot down what one has Learned about Things. I do not enjoy spelunking in human depravity, nor do I wish my machine around to tape-record the emunctory noise of psychic or physical human excesses. Even so, there is hope in Norman Mailer’s turbulent motions.