The Mailer Review/Volume 9, 2015/Introduction to Taschen Edition of Superman Comes to the Supermarket

On November 3, 1960, five days before John F. Kennedy defeated Richard Nixon for the presidency by less than one percent of the popular vote, Norman Mailer wrote to Kennedy’s wife Jacqueline. He was replying to her letter thanking him for his extraordinarily favorable report on her husband’s campaign, an essay (published in Esquire magazine three weeks before the election) titled “Superman Comes to the Supermarket.” Mailer had depicted the campaign as the outcome of a dramatic morality play rather than as a realignment of voter preferences based on demographics and party promises. JFK was “a prince in the unstated aristocracy of the American dream,” while Nixon was described as “sober, the apotheosis of opportunistic lead.” Kennedy would win, Mailer predicted, because the nation was eager for change after eight dull, dispiriting years under President Dwight D. Eisenhower. There was a “subterranean river of untapped, ferocious, lonely and romantic desires” in the American psyche that Kennedy, a war hero with a Hollywood star’s glamour, seemed ready to engage. Looking back many years later, Mailer said, “The country began to speed up, the sexual revolution began with Jack Kennedy . . . things began to open up.” 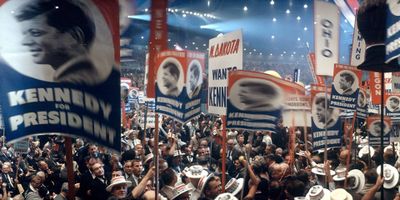 From the Taschen edition of Superman Comes to the Supermarket.

Mailer told Mrs. Kennedy that he was troubled by her husband’s disapproving, bellicose comments about Fidel Castro, who had just seized power in Cuba, but would nevertheless vote for him because “it is more important than ever that he win.” It was the first vote Mailer had cast for a president since 1948 when he campaigned for third-party candidate, Henry Wallace, who ran a distant third to Harry S. Truman and Thomas E. Dewey. The Kennedy mystique drew Mailer back into mainstream politics, and his essay became one of the earliest exemplars of the “New Journalism” (along with the work of Joan Didion, Gay Talese, and Tom Wolfe, among others), a new kind of writing that moved the observer onto the stage of the story. During the previous decade, Mailer had eschewed any part in conventional politics in favor of a frenetic, controversial role in the New York demimonde, where he extolled marijuana, jazz, sexual freedom and celebrated the disenthralled lifestyles of African Americans in magazine essays and columns in the Village Voice, a weekly Greenwich Village newspaper that he co-founded and named. Bored and depressed by the kneejerk patriotism and family pieties of the tranquillized Eisenhower era, and oppressed by “the corporations, the FBI, the CIA, and the Mafia . . . working in an overt and covert association,” Mailer saw Kennedy’s election as “the hairline split in the American totalitarianism of the fifties.” With the 43-year-old president and his elegant, cultured wife in the White House, politics had become exciting. In his speech accepting his party’s nomination, Kennedy spoke of America as a “new frontier,” a place of “unknown possibilities and perils.”

Mailer was present in Los Angeles when Kennedy gave the speech, and was dazzled. He saw Kennedy as a hipster president, a bold, canny, ambitious politician who had “the remote and private air of a man who has traversed some lonely terrain of experience, of loss and gain, or nearness to death.” For his services in helping get him elected, Mailer felt he was owed — at the very least — a meal, some drinks and the president’s ear, but his deeper desire was to become a key advisor, a cultural Cardinal Richelieu who would link the White House to the most exciting currents and actors on the American scene. He wanted a seat at the Camelot roundtable. Some in Kennedy’s court called Mailer “an intellectual adventurer,” and they had it right.

“Superman Comes to the Supermarket” was the brainchild of one of the top editors at Esquire, Clay Fleker, who later founded New York magazine. He and another editor, the brilliantly irreverent Harold Hayes, as well as the magazine’s co-founder and publisher, Arnold Gingrich (a fishing/drinking chum of Hemingway’s), were properly impressed by the edgy, self-conscious style Mailer displayed in the prefatory “advertisements” to his 1959 omnium-gatherum, Advertisements for Myself. Nevertheless, they believed that their magazine, which was rapidly emerging as the best place for the brightest literary talents of the new decade to publish, was elevating Mailer’s name as much as he was lofting the name of the magazine. A contest of egos ensued. Gingrich decided that the last word in the title of Mailer’s JFK essay should be “Supermart,” not “Supermarket,” and made the change before publication. Mailer protested, and was assured by Felker that restoration would be made. But it wasn’t, and in an angry letter Mailer resigned from the magazine. “You print nice stuff, but you gotta treat the hot writer right or you lose him like you just lost me. When I’m mayor, I’ll pay you a visit and see if you’ve cleaned the stable.” In later years, when admirers asked Mailer to sign a copy of the magazine containing his essay, he invariably crossed out “Supermart” and replaced it with the original word. 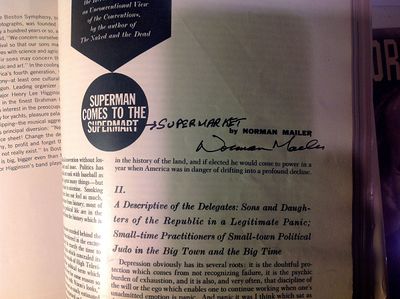 Mailer was not joshing about his ambition to become mayor of New York. Bloated by the success of his essay, he decided to run in the September 1961 mayoral primary elections — but not on the Democratic Party ticket. Instead, he planned to run on the ticket of the Existentialist Party, which at that time (and ever after) did not exist. His temper of mind, he wrote later, was “Napoleonic.” His friends listened to his plans, but with no enthusiasm. Mailer expected them, and his family, to rally around him the way the Kennedy clan had worked for JFK. Mailer’s family thought the idea was crazy, and his wife, Adele, was terrified by the possibility of becoming the first lady of the nation’s largest city. He intended to announce his candidacy at a large party at their Manhattan apartment on November 19, 1960, two weeks after Kennedy’s victory. Drunk and stoned on marijuana (which he believed unseated unhealthy repressions), a frazzled and belligerent Mailer got into fist fights with several of his guests at the crowded party. The worst was to come. At around five A.M. on the 20th, he stabbed his wife with a penknife after she delivered a taunt about his manhood. She almost died of the thrust, which nicked the sac surrounding her heart, the pericardium. Mailer received a suspended sentence and was placed on probation after Adele refused to testify against him. They divorced soon afterwards. His literary career was also suspended, and his political career seemed over.

But the influence of the essay was not diminished; indeed, it was enhanced by the notoriety surrounding Mailer at the time. Felker said that it had “an enormous impact,” and Pete Hamill, a journalist and novelist who was close to Mailer, said the essay “went through journalism like a wave.” Young journalists now recognized that the venerable inverted pyramid form learned in J-school, a form that front-loaded the most newsworthy information, had become dull and stodgy, partly because it ignored the array of narrative techniques developed by novelists over the previous century. Mailer used them all, including scene-by-scene construction, later fingered by Tom Wolfe as one of the most important technique of the “New Journalism.” “Superman” is one of the foundation stones of this movement, one that changed the face of writing about the news of the day. One difference between Wolfe’s writing and Mailer’s is that Mailer, extravagantly confident of the worth of his explorations, packed everything in: surmises about his subjects, larger speculations about the amazing changes in American life, and a filament of continuity extruded from Mailer’s own personality. In his essays and nonfiction narratives of the 1960s and early 1970s, he consistently included his line of sight on events, coupled with the nuanced examination of his personal responses to them. His radar for the mood of events is unerring, and — to extend the metaphor — his sonar for the depths of his subjects’ psyches has rarely been equaled. Identity and ambition were his touchstones.

In the middle of “Superman Comes to the Supermarket” Mailer describes his first meeting with then-Senator Kennedy at the family compound in Hyannis. The candidate tells the reporter that he is familiar with his novels, and after a slight but convincing hesitation says he has read Mailer’s most recent and controversial, The Deer Park, passing over the one monotonously referred to by everyone else, The Naked and the Dead (his 1948 novel of Pacific combat that spent over a year on the bestseller list). Mailer is stunned, and ponders whether Kennedy is being truthful, or has been prepped to name the The Deer Park, which deals with the lures and corruptions of contemporary Hollywood. He decides that it doesn’t matter. If JFK’s aides had advised him on what to say, Mailer concluded, it demonstrated the perspicacity of their boss and his predilection for hiring staff with subtle talents, and perhaps a sophisticated taste for literature. The encounter is the beginning of Mailer’s lifelong admiration for Kennedy — this side of idolatry, as he sharply disagrees with many of his ideas and programs — a fealty which is burnished when Mrs. Kennedy writes to Mailer to say that her husband did indeed read The Deer Park, finishing it on a rainy day in Hyannis. Some years later, Mailer spoke of his attraction to Kennedy: “He was a little like [President Franklin D.] Roosevelt: both were enchanting, had personality, and made America more fun to live in. His spell, his wit, the rich and broad life he led conquered us to the point that we would have talked about him for years. I took to him right away. Rather, to be honest, before him I had taken to his wife.”

In her letter, Mrs. Kennedy told Mailer that she also enjoyed his novel, and went on to say that before reading “Superman” she had “never dreamed that American politics could be written about that way.” She lauded his talent, and encouraged him to use it to write more nonfiction narratives. It was advice he took, writing accounts of subsequent presidential campaigns through 1972, and several novels set in earlier periods, most notably Harlot’s Ghost (his 1991 novel about the CIA in the 1950s and 1960s), and his 1995 collaboration with Lawrence Schiller, Oswald’s Tale: An American Mystery, a nonfiction book that explored the life of Kennedy’s assassin. JFK’s death is a crucial event in both books. Mailer never stopped worrying the bone of the Kennedy assassination (ultimately deciding that Oswald probably acted alone), and continued to ponder what might have been had Kennedy lived.

The slain president remained an inspiration, and in June 1969 Mailer ran in the New York City mayoral primary on the Democratic ticket. The popular newspaper columnist, Jimmy Breslin, ran for City Council president on the same ticket. The key plank in their quixotic platform was making New York City the 51st state; their campaign slogan was “Vote the Rascals In.” Mailer came in fourth in a field of five, and Breslin lost as well, and that was the end of Mailer’s direct involvement in politics, although he and Senator Eugene McCarthy seriously discussed running in 1996 — McCarthy for president and Mailer for vice president. The idea died aborning. Mailer went on to report on the 1996 election for George at the behest of the magazine’s chief editor and the martyred president’s namesake, John F. Kennedy, Jr. Mailer traveled around the country on the press planes of President Bill Clinton and his Republican opponent, Senator Robert J. Dole; and at 73, he was by far the oldest reporter covering the campaign, referred to by the others as “the Dean.” The tutelary spirit of his George articles was President Kennedy himself, whom Mailer revered until the end of his life as “a real man with a real set of desires to make a good and exciting and interesting change in history.”