The Big Comeback of Norman Mailer 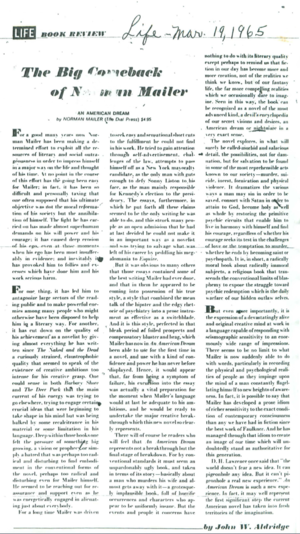 For a good many years now, Norman Mailer has been making a determined effort to exploit all the resources of literary and social outrageousness in order to impress himself in a major way on the life and thought of his time. At no point in the course of his effort has been going been easy for Mailer; in fact, it has been so difficult and personally taxing that one often supposed that his ultimate objective was not the moral reformation of a society but the annihilation of himself. The fight he has carried on has made almost superhuman demands on his willpower and his courage; it has caused steep erosion of his ego, even at those moments when his ego has been most insufferably in evidence; and evidently it has provoked him to follies and excesses which have done him and his work serious harm.

For on thing, it has led him to antagonize large sectors of the reading public and to make powerful enemies among many people who might otherwise have been disposed to help him in a literary way. For another, it has cut down on the quality of his achievement as a novelist by giving almost everything he has written since The Naked and the Dead a curiously strained, claustrophobic quality that seems speak of the existence of creative ambitions too intense for his creative grasp. One could sense in both Barbary Shore and The Deer Park that the main current of his energy was trying to go elsewhere, trying to engage certain crucial ideas that were beginning to take shape in his mind but was being balked by some recalcitrance in his material or some limitation in his language. Deep within those books one felt the pressure of something big growing, in vision or prophecy or simply a hatred that was perhaps too radical and disturbing defined embodiment in the conventional forms of the novel, perhaps too radical and disturbing even for Mailer himself. He seemed to be reaching out for the reassurance and support even as he was energetically engaged in alienating just about everybody.

For a long time Mailer was driven to seek easy and sensational short cuts to the fulfillment he could not find in his work. He tried to gain attention through self-advertisement, challenges of the law, attempts to pass himself off as a New York mayoralty candidate, as the only man with guts enough to defy Sonny Liston to his face, as the man mainly responsible for Kennedy’s election to the presidency. The essays, furthermore, in which he put forth all these claims seemed to be the only writing he was able to do, and this struck many people as an open admission that he had at last decided he could not make it in and important way as a novelist and was trying to salvage what was left of his career by pedaling his megalomania to Esquire.

But it was obvious to many others that those essays contained some of the best writing Mailer had ever done, and and that isn't them he appeared to be coming into possession of his true style, a style that combined the mean talk of the hipster and the edgy rhetoric of psychiatry into a prose instrument as effective as a switchblade. And it is this style, perfected in that bleak period of foiled prospects and compensatory bluster and brag, which Mailer has now in An American Dream been able to use for the first time in a novel, and use with a kind of confidence and power he has never before displayed. Hence, it would appear that, far from being a symptom of failure, his excursion into the essay was actually a vital preparation for the moment when Mailer’s language would at last be adequate to his ambitions, and he would be ready to undertake the major creative breakthrough which this new novel so clearly represents.

There will of course be readers who will feel that An American Dream represents not a breakthrough but the final stage of breakdown. Four by conventional standards it must seen in unpardonable ugly book, and taken in terms of its story—basically about a man who murders his wife and almost gets away with it—a grotesquely implausible book, full of horrific occurrences and characters who appear to be uniformly insane. But the events and people it concerns have nothing to do with its literary quality except perhaps to remind us that fiction in our day has become more and more creation, not the realities we think we know, but our fantasy life, the far more compelling realities which we occasionally dare to imagine. Seen in this way, the book can be recognized as a novel of the most advanced kind, a devil’s encyclopedia of our secret visions and desires, an American dream or nightmare in a very exact sense.

The novel explores, in what will surely be called morbid and salacious detail, the possibilities, not for damnation, but for salvation to be found in some of the most reprehensible acts known to our society—murder, suicide, incest, fornication and physical violence. It dramatizes the various ways a man may sin in order to be saved, consort with Satan in order to attain to God, become holy as well as whole by restoring the primitive psychic circuits that enable him to live in harmony with himself and find his courage, regardless of whether his courage seeks its test in the challenges of love or the temptation to murder, whether he ends by becoming saint or psychopath. It is, in short, a radically moral book about radically immoral subjects, a religious book that transcends the conventional limits of blasphemy to expose the struggle toward psychic redemption which is the daily warfare of our hidden outlaw selves.

But even more importantly, it is the expression of devastatingly alive and original creative mind at work in a language capable of responding with seismographic sensitivity to an enormously wide range of impressions. There seems to be no limit to what Mailer is now suddenly able to do with words, particularly in recording the physical and psychological realities of people as they impinge upon the mind of a man constantly flagellating himself to new heights of awareness. In fact, it is possible to say that Mailer has developed a prose idiom of richer sensitivity to the exact condition of contemporary consciousness than any we have had in fiction since the best work of Faulkner. And he has managed through that idiom to create an image of our time which will undoubtedly stand as authoritative for this generation.

D. H. Lawrence once said that “the world doesn't fear a new idea. It can pigeonhole any idea. But it can’t pigeonhole a real new experience.” An American Dream is such a new experience. In fact, it may well represent the first significant step current American novel has taken into fresh territories of the imagination.