The seeds of an emphasis on Norman Mailer and Ernest Hemingway in The Mailer Review have been present for a long time. I have been teaching and writing about Ernest Hemingway for more than three decades and powerful connections between him and Norman Mailer are obvious to anyone versed in twentieth-century American literature. Hemingway was one of a small group of American writers to dominate the first half of the last century. Mailer belongs to a select handful of writers who changed the literary landscape of the second half of the past century. Further, Mailer was a public intellectual, a prolific biographer, and a social and political chronicler, covering six sets of political conventions and writing about every president from Franklin Delano Roosevelt on. 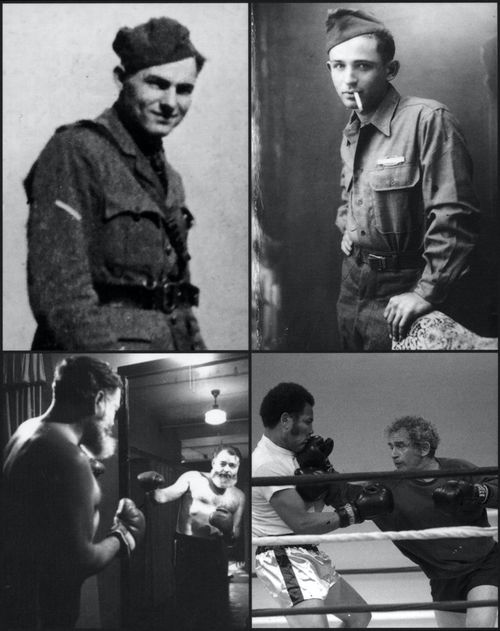 Both artists, from their beginnings, were intensely interested in fundamental human struggles: life and death, war and peace, the power and mysteries of sex, love and pain, joy and depression, consciousness of the void and its brief respites, human entropy, and the infinite enigmas of life. Both men were cultural iconoclasts, rabidly interested in “manly” sports, especially boxing and bullfighting. Both men loved French culture, lived in Paris, visited it often, knew the French novel, and were revered by the French.

Hemingway and Mailer were emphatically and explicitly eclectic in their writing careers. Yet I do not feel that either writer saw himself as an “interpreter” of life in the narrow sense of the term — that is, as a purveyor of static ideas and ideals. Hemingway and Mailer do not convey the impression that it is possible for literary artists (or any other artist) to explain, reductively, human experience. I read them as acute, intensely sentient intellectual travelers, far more interested in exploration and interrogation than in personal performance as reality instructors. What has nurtured me over the years, aesthetically and intellectually, is their ongoing challenge to readers to never cease to engage what is perhaps life’s ultimate question: what does it means to be human (and humane)? Hemingway and Mailer have taught me to hold gingerly my values, beliefs, and convictions in light of new experience. They continually remind me that my interpretive grid (“forestructure” in the lexicon of Heidegger), however limited, is always and already in a state of evolution. Perhaps the most important gift that they have given to me through their respective art is a summons to always question the values that I hold, to continually be ready and willing to modify my thinking and beliefs in response to emerging exigencies.

Hemingway and Mailer have long been recognized for their dogged determination to craft new styles of writing, to bring the aesthetics of the past into forms appropriate to new times. In spite of significant differences in style, both writers were master metaphoricians, employing a wide range of rhythms of figuration. Both writers, at least in their best work, performed swirling, seductive dances of intertwined grammar and rhetoric, lifting their words to dizzying levels of sublimity. Two sentences — synecdoches for their respective novels — that resonate with force come from early narratives. Near the end of The Sun Also Rises, Jake Barnes says to Brett Ashley, “Isn’t it pretty to think so?” Hemingway’s intertwining of grammar and rhetoric (what kind of a question is it?) resonates with nuance that characterizes the novel as a whole. What does one know and how does one know? The first words of The Naked and the Dead are “Nobody could sleep.” These three words launch and evoke a cycle of associations with the terrors of war. They serve as a point of departure for Mailer’s surgical exposition of the minds, emotions, and bodies of soldiers who populate this groundbreaking novel. These simple sentences of Hemingway and Mailer serve as a catalyst, at least for this reader, to engage literary art in a compelling, yet ultimately unachievable, search for meaning.

There is no question that Hemingway was a significant influence on Mailer, as several essays in this volume articulate. Was Mailer influential on Hemingway, even in a limited way? There is no evidence to support any direct influence, but Hemingway was certainly aware of young Mailer’s talents. There were common interests and experiences that bound these literary warriors. Both men became international celebrities at roughly the same age. Hemingway was twenty-six when The Sun Also Rises was published, establishing him as a major American writer of international stature. Mailer was twenty-five when The Naked and the Dead ignited worldwide interest in this rising star. Mailer’s chronicle of the Pacific theatre of World War II remained number one on the New York Times bestseller list for an amazing sixty-two weeks. These prolific American treasures were a generation apart in age. (Mailer lived twenty-three years longer than Hemingway, surely resulting in a major difference in their outputs.) Yet Hemingway was only forty-nine when he learned of the stunning success of Mailer’s first novel — and a war novel no less. Hemingway’s war fiction (A Farewell to Arms, For Whom the Bell Tolls, and Across the River and Into the Trees) clearly plays a major role in the Hemingway canon and this love of common subject matter was an intellectual and aesthetic binding force early on. Sadly, the two lions never met. What might have been?