Difference between revisions of "The Mailer Review/Volume 1, 2007/Remembering a Good Friend" 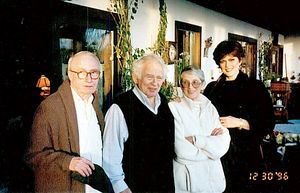 These remarks were delivered at the Memorial Service for Robert F. Lucid at the University of Pennsylvania on April 14, 2007.

A few minor afflictions, common to old age, keep me from attending this memorial service for a dear old friend. Let me add at once how fortunate I am that another friend, of many years close acquaintance to Robert Lucid and myself will be able to read these remarks. To that extent, let me feel that I am here in spirit.

Bob Lucid, as so many of you know, was not an ordinary fellow. An American literary scholar of considerable stature, and an exceptionally talented lecturer, what made him even more unique was the constant and stimulating private flavor of his views large and small. He was the rare example of an intellectual who could never allow himself to become mired in the jargon of his profession. He spoke as if each word had to be introduced into the hearing of others with its original resonance restored. Words were never to be used as lead slugs to weigh upon the argument of those opposed to you. To the contrary, words were the gates to subtle appreciation of the likely and the unlikely. It was Bob’s exceptional talent as a lecturer never to obscure the mystery of an explanation. A fine novel, as he would present it to his classes, was an opportunity to enter a little more deeply into the perplexities and complexities of existence itself. Social enigmas and psychological discoveries were not to be understood in full, completely and masterfully, rather, they were to be elucidated to a further degree, and thereby prepared for further interpretations. Listening to Lucid talk about a novel was not unequal to learning more about a good friend who is still full of surprises. Listening to Bob’s voice was analogous to coming closer to a certainty that had to remain, by its nature, not quite capturable. Therein rested its beauty. One read the best works of literature not to form up whole barricades of fact but to recognize that there were vibrant presences in the air of the author’s style and they might even accompany you through the years to come, and so could even enrich one’s grasp on what may be the mightiest question of all — which is, why are we here and what is our purpose?

In that sense, Bob Lucid was one of the unheralded literary apostles of our time. Let me conclude that I have literally been approached in airline terminals and railroad stations by undergraduates with an unmistakable light in their eye. They had something to tell me, and it was not that they had recognized my face, no, better than that, it was all in the excitement with which they would say, “Mr. Mailer, I just want you to know — I have studied with Dr. Lucid.”

I can swear that this happened to me most definitely on several occasions and if my memory is not treacherous, even more than three or four times. What a fine presence was Robert Lucid, a gentleman with a rare quality — a silvery resonance of mood that spoke of an indefatigable love for the virtues of culture.