In field artillery, forward observers are told to bracket a target. If, in their estimation, the first shot falls three hundred yards short, they call for the next to be six hundred yards farther. They want to be certain to land on the far side; that way, by comparing the near and the long, they can approach a direct hit. The target is not found as well creeping toward it. One wants to make certain that errors fall to opposite sides of the mark. 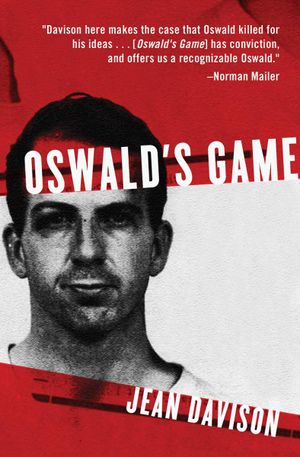 Oswald’s Game by Jean Davison fulfills such a purpose. Considering the difficulties surrounding one lonely researcher, she does it well, and here I may as well confess that the author came to my attention when she wrote me a letter full of gentle but determined criticisms to Conspiracy by Anthony Summers (McGraw-Hill 1980). I suggested then that she write her own book. Indeed, she has, and I think it may enter the small canon of acceptable words about Lee Harvey Oswald and the Kennedy assassinations, and say this although I am still not sympathetic her point of view which would argue that Oswald was not an agent for the KGB, CIA, or FBI, nor any part of an anti-Castro Cuban conspiracy with the Mafia to kill Jack Kennedy (which possibilities are carefully investigated in Anthony Summers’s book) but to the contrary, Davison here makes the case that Oswald was what he purported to be, an isolated Marxist, half-crazed, who killed for his ideas — in other words, we are given the Warren Commission revisited. While their august labor now resides in our minds as a congeries of evasions, replete with bad conscience (for the Warren Commission cut off more interesting possibilities than it opened) Jean Davison has gone through the forest and settled on a string of trees that offer a path. Her product, as a result, has lucidity and Oswald emerges as the protagonist of a novel, rather than as a set of forced conclusions by committee. Her work, in short, has conviction, and offers us a recognizable Oswald, a desperately fouled-up young psychopath, full of brilliance, arrogance, cruelty, and bad spelling all in one. So Oswald’s Game presents a thesis that is unpleasant but not to be ignored, for it is possible. The merit is that Ms. Davison lands on the other side of the target.

When we treat such enigmas as assassination and the possible implication of secret police, we never know whether to give such agents credit for too much intelligence or too little — the crucial question is always: are they as stupid as they seem? Or do they pretend to such incompetence in order to conceal exceptional plans and works? Of course, both may be true. Some of the brightest and some of the most stupid (let us say blindly stubborn) men among us go into secret police work. Short of a solution to the Kennedy assassination, we do have to live, therefore, with two notions of Oswald — that he was the focus, the pawn, and the plaything of more than one intelligence organization, most specifically the CIA and the KGB (and on this is much intriguing evidence that Summers presents, and Davison all but ignores) or, to the contrary, these services were surprisingly benign in their treatment of Oswald — which is not inconceivable given the peculiar reflexes of bureaucracy — but is certainly suggestive of intense incompetence. It is not easy to believe that the KGB would accept an American defector without scrupulously analyzing the possibility that he was a young CIA plant, or without trying to turn him into an agent for themselves. At the least, to make him a double agent would be a game of much interest to them. In turn, on Oswald’s voyage back to America, we are also asked, via Davison, to believe that the CIA never debriefed Oswald, or made any attempt to use him as a counter in a game with the KGB. It is hard to believe all those intelligent, game-hardened Ivy League classmates of mine were not seizing the rare opportunity that Oswald presented. Still, Davison takes the benign view. Somehow or other, Oswald slipped through. They did not bother with him. They were out to lunch when he came along. It is conceivable, but it is a point of view that must ignore much, particularly that the genial and urbane George de Mobrenschildt featured in her pages was not conceivably debriefing Oswald for the CIA.

If we are willing to accept Jean Davison’s portrait of Oswald as a psychopath, and to a great degree I am, it becomes difficult to see him pursuing one course to the exclusion of all others. Psychopaths have a prodigious sense of their own talents, of their speed of mind and essential importance — so they see opportunities everywhere. Given their enormous sense of the present, their lack of loyalty to the past, and their taste for action, it is natural for psychopaths to attach themselves to every opportunity even when their aims are contradictory. The clue to much of Oswald’s behavior, and Davison leads us to it even at damage to her thesis, is his psychopathy. He would not have been out of his element leading eight lives at once. To assume, however, that none of these eight lives was dictated by the KGB, CIA, FBI, Mafia may be to insist on a valley in this fog where others sense a mountain range. Davison does not even seem aware that Marina Oswald’s uncle, Ilya Prusakov, was a lieutenant colonel in the MVD and a leading light of Minsk. He gave approval to her marriage to Oswald. The Marina Oswald that Jean Davison offers us does not present such fine connections.

No matter. I return to the first dilemma. The net of conspiracy is always more or less finely woven than what we do perceive of it. Coincidence often creates the facsimile of evidence for many a conspiracy. To give my own example, I remember that I worked through of the Fifties in a small studio building on Fulton Street in Brooklyn, and on the floor below worked Colonel Abel, undercover head of a vast net of Soviet espionage in America. For years Abel and I must have gone up and down in the elevator together many times. Then, too, in the late Forties, I subscribed for a little while to the Daily Worker, and since I was staying with my parents at the time, my father was brought up before a Loyalty Board and almost lost his governmental job. Finally I wrote a novel called An American Dream and in the first paragraph Jack Kennedy is mentioned not ten lines away from the name of the villain whom I chose to call Barney Oswald Kelly. I wrote that paragraph in September, 1963, two months before the assassination.

Conceive of those items as they must look on a computer readout in some Intelligence shop. Then add to them that in 1965 I exhorted Berkeley youth to hang posters of LBJ upside down as a protest against the war in Vietnam, and in truth was so demagogical that a standing ovation rewarded me. I am struck how full of profile many a dossier can seem if we are not alert to these unfathomable powers of coincidence. So I can read Oswald’s Game as a most legitimate attempt to perceive the terrain on that other side of the moon where lives are always less interesting than they ought to be, and less sinister, less manipulated. Though I belong to the Summers’s school of conspiracy, I still think Jean Davison has delivered an invaluable tool, a corrective, a clear measure of the other possibility to be kept in mind by all us other amateur and professional investigators of the great American mystery. From my side of the debate, I choose then to greet her work.