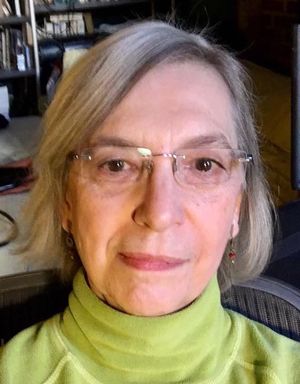 Carol Holmes Alpern was introduced to Mailer’s writing by Robert F. Lucid when she was a graduate student at the University of Pennsylvania in 1964. In July 1969, while Mailer was in Florida covering the moon shot, she and Lucid went to the Columbia Heights apartment and a warehouse in Manhattan and worked on the beginnings of the archive that is now housed at the Ransom Center. She and Mailer began corresponding in April 1970. Their friendship and correspondence continued until his death. Carol dropped out of academic life in the mid-1970s and worked instead as an editor and proofreader. She is a lifelong Quaker, has held leadership positions in the Religious Society of Friends, the Council of Churches of the City of New York, and served on the board of Friends United Meeting and the advisory board of Earlham School of Religion. She has written for Quaker Life magazine and reviewed books for Harper’s and the now-defunct Philadelphia Bulletin. Her forthcoming memoir Choosing Miracles: A Chronicle of Voices, Visions, Angels, and Quakerism is dedicated to the memory of three of her mentors: Morse Peckham, Leslie A. Fiedler, and Norman Mailer. She suspects Norman would hate the book.