Preface to The Good, the Bad, and the Dolce Vita

It may be fair to say that I encountered Mickey Knox before I ever met him. That’s because I saw him first in a movie called City Across the River, a B film made, if I recollect, back in 1948. It was about a Brooklyn gang called the Amboy Dukes, and Mickey played their leader, a small, trim, well-contained young hood with absolute authority over his cohorts despite the name he carried—Larry Tunafish. It was a riveting film to me, since I, too, came from Brooklyn, and was caught up with enjoying my tangential acquaintance with the subject. 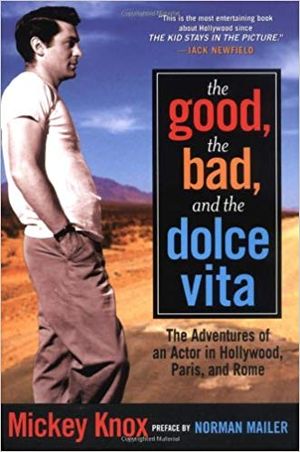 At that time, I knew nothing about the art of the actor, and was quick to assume that the real Mickey Knox must be truly tough. Over the years, I came to learn that my friend was indeed tough in his own way—he had learned to survive in Hollywood and Rome where a player can hardly develop the confidence that his wallet and his ego will not be on the chopping block by evening. Given the ups and downs that he went through (and has now written about), a weaker man could have gone under.

I knew little of that, however, on the day we actually met, sometime in the summer of 1949. I came through the door of his house brought along by a mutual acquaintance, we shook hands and I said, “Hey, you’re a real good actor.” For there he was before me, my own size, and my own psychic weight, which is to say, not tough, not weak, just there, another friendly guy from Brooklyn ready, much like myself, to get along with anyone whose hand you were shaking for the first time. He was in person, therefore, a long distance away from the study in force he had presented as a gang leader, and so I said, “Hey, you’re a real good actor,” and our friendship was begun. He did, after all, love The Naked and the Dead.

Since then we’ve been around for each other as stand-up friends over more than five decades and each of us has learned a good deal about the permutations of lives that go in and out of parallel, into marriage and into divorce—hell, we were even brothers-in-law for a time, married to two sisters back in the late fifties, and we each became the father of two girls, beautiful girls then and beautiful now, a nice feat I cannot keep myself from declaring aloud.

I do not wish to give a sampling of what is to come in these pages (although the reader will encounter a host of movie stars with fresh anecdotes nicely attached to them) but I would underline how frustrating were the situations that were soon to come upon Mickey Knox after we met. Like many a young actor in his milieu, he was left-wing, and got trashed in the hysteria of the early fifties while the Hollywood red-hunt was going on. In a few months his fortunes shifted from being a young actor under contract who had already made ten movies over a brief two years, to a young actor who could not get any work. His career floundering, his French wife, Georgette, as practical as she was charming, broke up with him, and he was reduced to living on his wits with what must have been the unendurable ambiguity of not knowing whether the town had decided he was without the talent to become a real star, or was, rather, on an undeclared blacklist. Indeed, the blacklists in those days were, for the most part, secret, and the gray lists were even more numerous. I remember that with the exception of one month’s work for Sam Goldwyn, I could get no jobs as a screenwriter, as this, after all, was in the year after the publication of The Naked and the Dead. Indeed, my agent at the time, a decent conservative man, could never understand why.

Mickey kept alive. He went back to New York, worked at Actor’s Studio, did some TV and went back to L.A., where he developed a reputation I soon envied him for. It was as a lover. For a man who has no money and no prospects, that was not a small achievement in L.A. Indeed, there were periods where he had the back door key to more than one movie star’s apartment, the same ladies who would be coupled in the gossip columns with their leading men. When you are not yet thirty, and a friend is having carnal success without fame or fortune to back him up, it is not routine to be free of envy. It was obvious that his sex life had more drama than my own.

Later, his movie career moving nowhere, he migrated to Rome and there he would live for much of his life while working on Italian films as an actor, translator, dramatic coach, and dialogue director. It was also a time when he coached Anna Magnani, Marcello Mastroianni, and acted with him and Sophia Loren. He also became so knowing about Rome, Roman ways, and the felicities of the Italian language, that indeed there was a long period when visiting Americans and even a few Italians would call him the mayor of Rome. To know Mickey Knox in those years was to be provided with all the guide that an average good American needed for the Via Veneto.

Occasionally, Mickey would come back to New York, and on one of those returns he saved my play of The Deer Park on opening night at the Theatre De Lys, which was then as royal a theatre as you could find off-Broadway, what with its proscenium stage and 299 seats all covered in red velvet.

We had had a month of previews. By opening night, therefore, all my friends, family, and theatre acquaintances were veteran audience. Nonetheless, I invited all one hundred back for the occasion. There were also a hundred seats for ticket buyers and finally a most formidable one hundred for the theatre critics who occupied most of the ten rows and proceeded after curtain-rise to sit there in a collective block of ice, one hundred frozen critical faculties all intact, and so powerful in their presence that for the first half hour, no one in the audience dared to laugh. My friends and relatives, having seen the play several times, could not be surprised into sufficient energy to laugh one more time at familiar lines, not in the chill of these critics. The hundred new theatergoers weren’t ready to laugh at all, certainly not while the giant ice block up front neither squeaked nor groaned.

The play went on in agony then for the actors, the director, and the playwright. We had our thirty previews, and on decent nights we had aroused a good deal of laughter in the first thirty minutes; even on less-good evenings, one could feel some real merriment. But here, opening night, not a sound. My actors were like a team that was being badly outplayed, but managing to hold together just enough not to fall apart. It was a respectable feat under the circumstances.

Not until the fortieth minute did Mickey Knox make his entrance. He was playing Collie Munshin, a classic Hollywood producer of that period, a man who knew every good and evil nuance to be extracted from an unexpected opportunity, and he came onstage like a winner. There was a force in him reminiscent of his distant, long-gone film brother, Larry Tunafish, and he radiated such confidence that a first crack appeared in the ice block, and then the first laugh of the night actually rose up out of the frontal mass. In another two minutes everyone in the theatre was laughing, indeed, they didn’t stop all the while Mickey was on. Good momentum—so much like the awakening of momentum in a football team—was back, and we succeeded in half-carrying the day. Our reviews ranged from good to fifty-fifty and the play survived for four months. I don’t think we would have lasted four days without Mr. Knox.

He has had other great days in his life, and certainly some great nights, but this particular evening is the one I would honor the most, for he came out onstage knowing the stakes and the perils, and he took command. There are not many stage actors, no matter how stellar, who can rally their team in the manner of a great athlete. Part of the joy in remembering this hour is that it emerged from the sum of many frustrations in his career, and yet also was fueled by the bond of our friendship. It is not a small event when on separate rare occasions we succeed in doing something for oneself and yet do something more for a best friend. How agreeable that hope is not always ill-invested in a long friendship. You can see then that this preface is written in salute to a rare warrior of that rarely heroic world of stage and screen, honors to you, old friend Mickey.